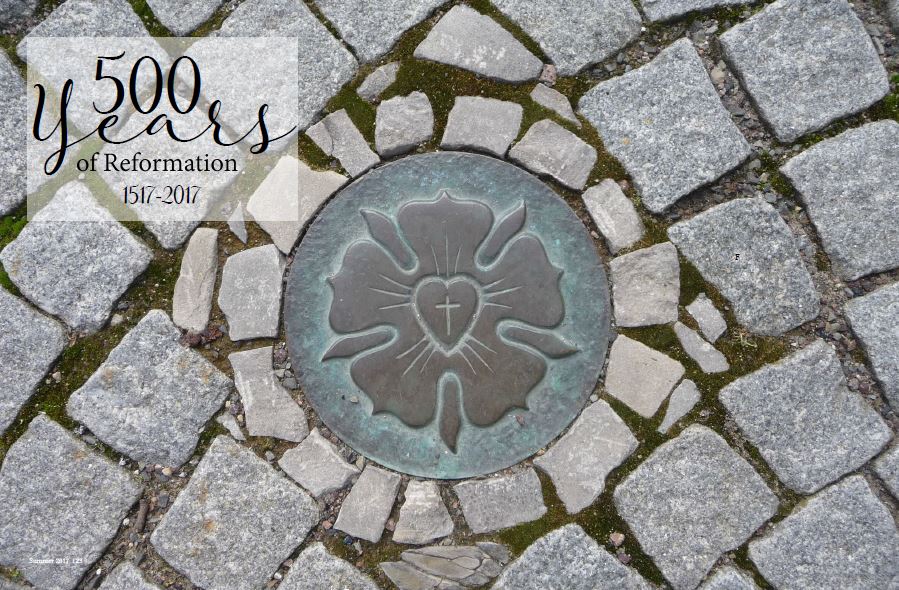 Fourteen members from White Memorial Presbyterian Church went on a mission trip to Poland and Germany from May 10 through the 18 of this year to better understand and celebrate the 500th Anniversary of the Reformation. In addition to spending time with Polish friends at the Evangelical Theological Seminary in Wroclaw, the group attended a re-creation of one of the first Protestant worship services and visited major sites that shaped the life and work of Martin Luther, ending in Berlin with a visit to the Jewish Museum.

From Martin Luther to a Polish Protestant history laser show on Friday night at the Lutheran Church in Wroclaw. Through wars and rumors of wars, the church has endured, her witness tried and true. This witness is why Wojciech does his work. It is why we [went]. It is why we/they teach students. It is part of why the faith matters. It takes many forms. Lectures, service, works of art. But its many forms speak to many different people. Its many forms are the gifts of the church. And sharing our gifts is what we are supposed to be doing.
Lord knows, the people of Wroclaw and our friends at EWST have been doing as much for us. - Christopher Edmonston

This memorial spoke to me in so many ways. It provoked thoughts of the crucified Christ, emptied for humankind, as well as thoughts of the risen Christ filled with nature and love. The arms of Jesus seemed to me to be reaching out to all. I see an image of the curtain torn and God's demonstration of his nature by the love of his son, Jesus. The words at the bottom of the memorial are loosely translated, “If you forget, you forget me.” A reminder to not be silent when the marginalized are treated unfairly.
How wonderful to stand in front of the memorial with church friends, and the steeples of St. John the Baptist cathedral in the background as we celebrated the 500th anniversary of the Reformation.  - Ann Rosar

From the mid-morning, overcast sky and light rain while touring the dark, grim, death-factory at Auschwitz, to the evening on the Rynek with perfect weather, lively crowds, street musicians and great kielbasa with our group. Quite a lot for the senses to process in a matter of hours. - Tom Robinson

The Jubilee service at St Mary Magdalena Church was a display of unity to see a large group of clergy, who represented many different denominations, gather together to celebrate Martin Luther’s vision. It was also inspirational in the fact that there was a core value that these men and women all shared in God; there were differences and yet there was a sameness. But when the congregation started to sing “A Mighty Fortress Is Our God”, a tune all too familiar to me, there was an unfamiliar difference as the congregation all sang the tune in their native languages. We may all speak different languages, but that does not deter us from singing the same hymns. - David Rosar

We saw the "Luther rose" during the lightshow and it was worn as an insignia by many of the clergy who attended the Sunday service.  - Dan McConnell

Martin Luther and the Reformation made it possible for Protestant Christians to grow in faith and numbers. I see the EWST Education Center as a place that furthers that vision for believers to go forth in the entire world and spread the Word. Also, from all I witnessed in Wroclaw, their mission is to join hands with Catholics, Jews, Lutherans and all who are believers in a higher power who live in Poland and surrounding areas. I am still in awe of the things I witnessed that broaden my belief in God’s work through Jesus Christ in so many lives in the most unexpected places.  - Ginger Neustad

Our early evening walk in Herrenhut , Germany, was a peaceful time of reflection in a pastoral setting. Martin Luther was the focus of our Reformation trip, but I learned that not all the credit for the Reformation was due entirely to Luther’s insight or his 95 Thesis. The process of “reforming” the Catholic church had been happening for a century. Various theologians contributed to this change and could just as easily have been given credit for new ideas and the growing split with The Church. The Reformation did happen and its great impact on the future could not have been imagined 500 years ago, or today. - Louise Hartung

On the last full day of our trip, we made a visit to the Jewish museum in Berlin. Polish-American Architect Daniel Libeskind designed the new extension to the original museum to recreate in the visitor the feeling of absence caused by the Holocaust. The Garden of Exile is meant to evoke the feeling of disorientation felt by Jews fleeing Berlin during the Nazi period. The architect produces this feeling by having you walk out into a walled courtyard with a steeply sloping cobblestone floor. The visitor physically feels the instability of standing on tilted ground, within a place that has an order that you do not fully understand. What struck me most palpably was the thought that while an émigré might leave the horror of Germany behind physically, some of that horror would be left within him. But when you look up, there is growth and light.

A thought-provoking way to end a trip that examined many aspects of faith. - Siobhan Millen

Our travel through Germany brought us to many of the significant places in Luther’s life. We visited (not in this order):
1. His birth place (Eisleben)
2. The church where he was baptized (Eisleben)
3. His parents’ home (Eisleben)
4. The Augustinian-eremite Monastery where he was a student and monk
(Erfurt - picture shown bottom left)
5. Where he posted his tenets (Wittenberg Castle Church-picture above center)
6. His home where he lived after the posting (Wittenberg-picture above right)
7. Where he normally preached (Wittenberg)
8. Where he preached his last 4 sermons (Eisleben)
9. Where he died (Eisleben)
10. His tomb (Wittenberg Castle Church)
Perhaps the two most significant were Wartburg Castle and Augustinian Monastery in Erfurt where Luther studied

The greatest thing about the Reformation? That we are still reforming. We're not done yet. In spite of some of the evidence, there's life in the church yet.  So long as she keeps reforming.
God grant us grace all the way to the end. Thy kingdom come, thy will be done. - Christopher Edmonston